What are EMFs (Electromagnetic Fields)?

There is a growing concern in the scientific community that the electric and magnetic fields (EMFs) to which people are routinely exposed cause adverse health effects. What are sources of EMFs and when can they be dangerous?

An “electromagnetic field” is a broad term which includes electric fields generated by charged particles in motion, and radiated fields, such as TVs, radios, hair dryers and microwave ovens. Electric fields are measured in units of volts per meter, or V/m. Magnetic fields are measured in milli-Gauss, or mG. The field is always strongest near the source and diminishes as you move away from the source. These energies have the ability to influence particles at great distances. For example, the radiation from a radio tower influences the atoms within a distant radio antenna, allowing it to pick up the signal. Despite the many wonderful conveniences of electrical technology, the effects of EMFs on biological tissue remains the most controversial aspect of the EMF issue, with virtually all scientists agreeing that more research is necessary to determine safe or dangerous levels.

Research since the mid-1970s has provided extensive information on biological responses to power-frequency electric and magnetic fields. The Electric and Magnetic Fields (EMF) Research and Public Information Dissemination (RAPID) Program was charged with the goal of determining if electric and magnetic fields associated with the generation, transmission and use of electrical energy pose a risk to human health. The fact that 20 years of research have not answered that question is clear evidence that health effects of EMF are not obvious and that risk relationships, if risk is identified, are not simple. Because epidemiologic studies have raised concerns regarding the connection between certain serious human health effects and exposure to electric and magnetic fields, the program adopts the hypothesis that exposure to electric or magnetic fields under some conditions may lead to unacceptable risk to human health. The focus of the program is not only to test (as far as possible within the statutory time limits) that hypothesis for those serious health effects already identified, but to identify, as far as possible, the special conditions that lead to elevated risk, and to recommend measures to manage risk.

Electromagnetic hypersensitivity (ES) is a physiological disorder characterized by symptoms directly brought on by exposure to electromagnetic fields. It produces neurological and allergic-type symptoms. Symptoms may include, but are not limited to, headache, eye irritation, dizziness, nausea, skin rash, facial swelling, weakness, fatigue, pain in joints and/or muscles, buzzing/ringing in the ears, skin numbness, abdominal pressure and pain, breathing difficulty, and irregular heartbeat. Those affected persons may experience an abrupt onset of symptoms following exposure to a new EMF, such as fields associated with a new computer or with new fluorescent lights, or a new home or work environment. Onset of ES has also been reported following chemical exposure. A concerted effort to provide scientifically valid research on which to base decisions about EMF exposures is underway, and results are expected in the next several years. <!– Meanwhile, some authorities recommend taking simple precautionary steps, such as the following: 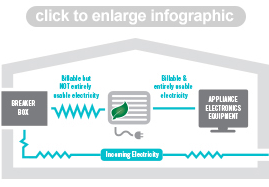